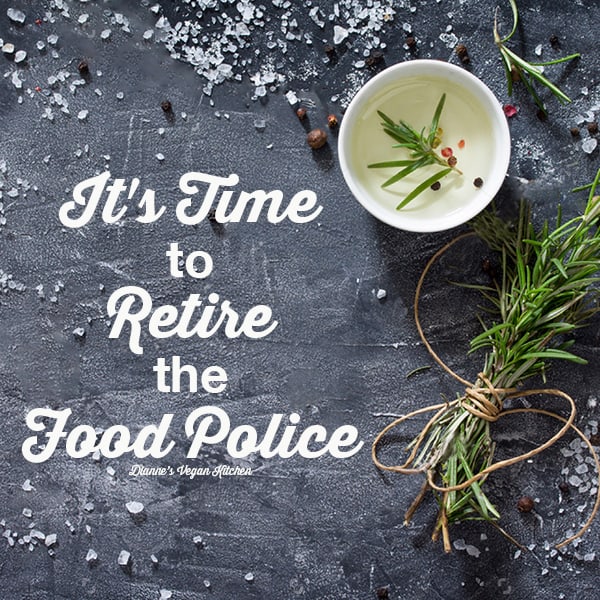 I don’t usually take to the internet to rant. There have been the infrequent occasions when I’ve had a rough day or someone has angered me to the boiling point and I have posted something on Twitter or my personal Facebook page, but usually I keep things to myself. Until today. I just can’t hold my tongue anymore. About what, you maybe be wondering? It’s the Food Police. The Food Police seems to be a volunteer run operation, and I think maybe those volunteers should find other organizations that would welcome their time. An animal shelter perhaps? Or maybe a soup kitchen?

It used to be that The Vegan Police would roam around through the streets of the internet, as well as through the streets of real life, and call people out on their non-vegan behavior. “Are you sure those shoes aren’t leather?” “You consider yourself vegan and you smoke? Don’t you know cigarettes are tested on animals?” “Is that mascara from Covergirl?” I’m not sure where The Vegan Police came from. Were they just visiting from Planet Vega? Did they evolve from some form of fear? What exactly was their mission? Did they think that the world would implode if a new vegan still wore old wooly sweaters from her non-vegan days? Were they afraid of being misrepresented in the public eye? I’ve never been a fan of The Vegan Police. They were famous for turning off potential vegans with their all-or-nothing attitudes and anger towards the non-vegan world. If going vegan makes someone angry and judgmental, why would anyone want to convert?

Now, don’t get me wrong – I’m 100% vegan. I don’t eat meat, dairy products, eggs or honey. I read labels before I buy anything. If any animal products have passed through these lips at any point in the past 12 years, it was accidental.  I don’t wear wool, leather, down, silk or anything made with shells. I’ve requested non-down comforters and pillows when traveling and staying in B&Bs.  I don’t buy products tested on animals, and I’m a big supporter of vegan businesses. I don’t like when people claim they’re vegan and they actually eat fish and eggs. I will tell people that while I commend their actions to reduce animal products from their lives, they aren’t actually vegan. Saying you’re vegan when you’re not confuses people who don’t know what vegan means and muddies the definition of veganism. What I don’t advocate is the admonishment of people in transition and people who may need support in their new vegan lifestyle. I also don’t like the depiction of the angry vegan in the omnivore world. 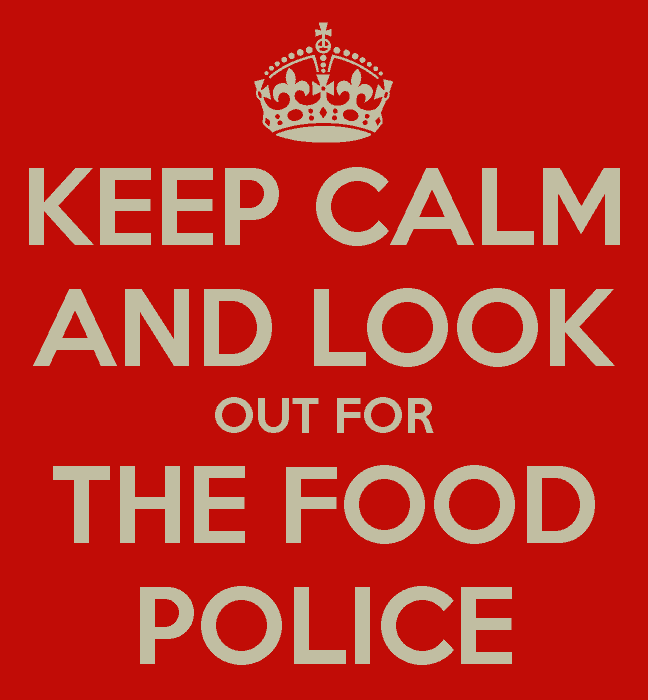 I noticed that Police activity seemed to die down a few years ago. My theory was that the vegan movement seemed to be growing and there was safety in numbers. Or maybe it had to do with more vegan products on the market and less people “cheating”? Whatever the reason for the dwindling number of Police on the prowl, the world seemed like a calm, carefree place for a little while.

Then boom, from out of nowhere came a new form of Vegan Police – The Food Police. The Food Police want everything they eat (and everything that everyone else eats) to be vegan, gluten-free, grain-free, oil-free, sugar-free, soy-free, nut-free, fat-free, salt-free, non-gmo, completely organic, 100% unprocessed, made with kale, and, if possible, in smoothie form. I’ve seen bad reviews on vegan cookbooks because the recipes contained within it’s pages were made with oil, sugar or wheat. I just read a review where someone gave a vegan cookbook a bad review because the recipes weren’t healthy enough. I’m most definitely an advocate of healthy eating but, I also know that the words “vegan” and “healthy” are not synonymous. I’ve received so many nasty comments about what I eat, that I’ve stopped posting photos of food on my public Facebook page. I was told that I eat too much processed food because I posted a photo of a Vegan Cuts Snack Box, I’ve been reprimanded for eating too many carbs, warned about eating GMO corn (how do you know my corn was GMO, dude?), told I need to learn how to control my appetite because I ate a taco at an airport where the only vegan options were wilted iceberg lettuce salads and tasty tofu tacos (which would you choose?), and I was accused of killing orangutans because I reposted someone else’s photo of vegan cheese.

As a health coach, I’m a proponent of healthy eating. I encourage my clients to cut back on processed foods, sugar, oil, gluten and GMO foods and I suggest that they buy organic whenever possible. If they falter, I don’t reprimand them like naughty school children, so I most certainly would never consider trolling the internet to berate strangers for the same behavior. What would prompt someone to chastise a total stranger over his or her eating habits? Does anyone really think it’s helpful? Whenever I get a negative comment about food that I’ve posted on Facebook, it makes me want to take a photo of myself jamming a sugary, soy covered, gluten filled, oil laced pastry into my face, just out of spite, even though that’s something I wouldn’t normally consume. (It also prompts me to block the commenter from being able to comment again.) I really can’t think of anyone who would be thankful for unsolicited advice from a stranger about what they are doing wrong with their lives. Can you?

Where did this new form of Police come from? Perhaps the vegan movement has gotten too big now, and has split into factions. There are the gluten-free vegans, soy-hating vegans, oil-free-salt-free vegans, comfort-food vegans, vegans who just don’t want to eat animal products, sugar-free vegans, and list goes on. Maybe we have just become too comfortable in the realm of social networking and have completely lost all sense of manners and politeness. Surely the person who said that I eat too much processed food doesn’t walk up to her friends and coworkers and tell them what they should and shouldn’t be eating. Or does she?

Whatever the reason for this infighting, it needs to stop. Veganism will never get anywhere as a movement if we bicker, point fingers and judge each other. We will never be taken seriously in the omnivorous world if we can’t get along with each other. Most of the vegans I know dream of living in a vegan world, but why would anyone from the outside want to join us if all they see is in-fighting? If you’re a member of The Food Police, I suggest that you consider early retirement. It’s time for you to turn in your badge and place yourself on self-imposed, indefinite leave. 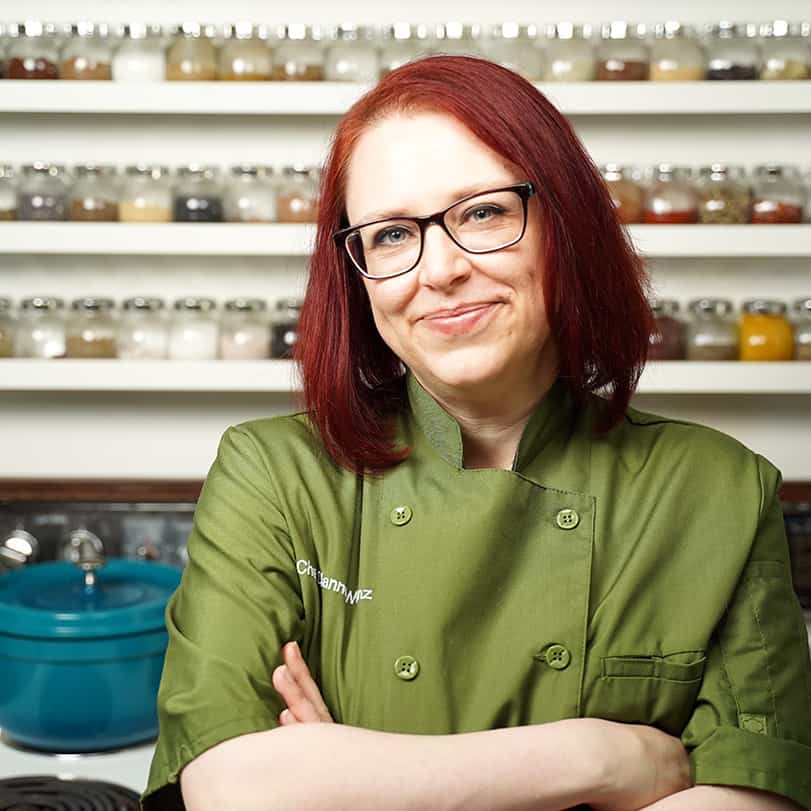 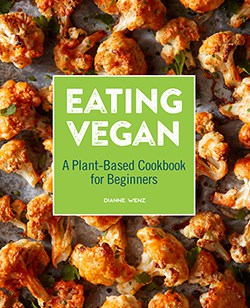 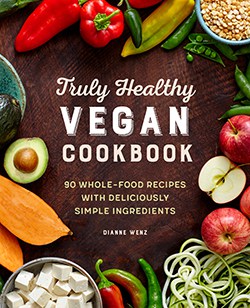